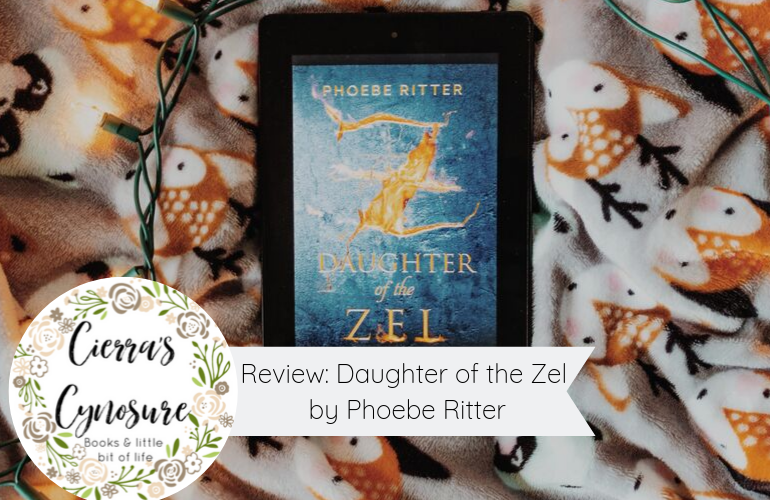 “Even though I am a prisoner here I have never been freer.”

Notice: I was contacted by Phoebe and offered a free kindle version of her book in exchange for an honest review. This does not affect my opinions of the work.

Raised on the border between Nevda and Zel, Efa has two certainties in life.

Their country’s neighbours, the warlike Zel, are to be feared. Her touch will kill, so she can never leave the island.

When Efa is kidnapped and discovers she is half-Zel, certainty will be hard to come by.

Daughter of the Zel is an incredibly short book of 191 pages. I twirled through the book in three days and could’ve done so in even shorter time, had I not been preparing to move for college.

My reading experience with this book was a confusingly pleasant surprise. Among other qualities, one key quality I watch for in books is the depth of world-building. For example, if you’ve read my review for The Storm Crow, you’d know how much I raved about the importance of world-building and personalizing each faction/kingdom/people present in the book.

However, in Daughter of the Zel, there is very minimal world-building. We are simply given two peoples: the Zel and the Nevda. We are told that these two peoples have been at war with each other for quite some time, and that the history of their conflicts is told very differently on either side of the border.

As I finished the book, I sat back and wondered if it’d be contradictory to say I enjoyed this book as much as I did with such a key aspect missing. I pondered and questioned what it was that compelled me so much about Daughter of the Zel. The answer lies in the characters.

The characters of this book are incredible. Efa, our MC, is a sweet soul with a deadly secret. Because her view of the world is very limited, it gave her voice an element of wondrous curiosity that made me feel like I needed to protect her. A main character that makes me feel something is a bright light in books, because without a compelling MC, my interest quickly falls apart.

Gi is also an incredible character. She’s archetypal in the fact that she’s a female army soldier that has learned the necessity of “thick skin.” However, she has an incredible sense of humor. If you’ve ever seen the movie Wreck it Ralph, Gi reminded me of Sergeant Calhoun (Fix it Felix’s wife).

“‘I’m not going near her,’ Cara answers.

‘I don’t blame you.’ Gi leans forward. ‘They had to send three men for her.’

The other girls look at me in horror but Gi winks as if she has paid me a compliment.”

Finally, the romance in this book is very sweet and pure. Efa and her romantic interest are kind to each other and respectful of boundaries. I cannot express how happy I was to see a romance so innocent and light.

“I know how scared you are of people leaving you. I would never do that, Efa.”

Because this book is so short, I believe it benefitted from its lack of world-building by not being bogged down by details. However, I do believe that world-building is imperative for a full-length novel and therefore urge the importance of it in Phoebe’s future works.

The concept of the Zel-Nevda child-bearing arrangements were very confusing to me initially. I had to go back and re-read the explanation of The Rescue/Lost of the Twenty a few times before I understood what exactly happened. For such an integral piece of the book’s plot, it’s unfortunate that it was confusing. Nevertheless, the understanding kicked in and I was hooked from then on.

As always, thank you so much for reading if you’ve made it to the end of the review, and thank you to Phoebe Ritter for gracing me with a copy of her book. You can buy it on Amazon for only $1.31, and I highly suggest picking it up and starting the series! I look forward to continuing the journey with Efa and co in Girl of the Nevda and Choice of the Sezel. Until next time!

5 thoughts on “Requested Review: Daughter of the Zel by Phoebe Ritter”

I was recently at B&N and I saw #TheCrowRider and remembered that I STILL haven't finished this series almost a year later...oops 🤐 I bought it, still haven't read it though. Maybe next book? 😅 #TheStormCrow #KalynJosephson #bookblog #bookblogger #booktube #booktuber #bookreviewer #goodreadschallenge #bookish #bookstagram #instareads #igreads #bookblog #ireadya #bookphotography #youngadultbooks
Slowly but surely, I *will* get through my physical tbr pile 😅 Continuing the quest with #WoveninMoonlight, a book I bought quite a few months ago at this point 🤫 I most likely will not be reviewing this book because I've heard own voices reviewers take issue with its representation of Bolivian/indigenous culture/history. Nevertheless, I own the book and want to read it to be informed by what mistakes it makes. Curious to know if anyone has read this book and liked/disliked it and why!
Happy Thursday! I currently feel like a 🦋 coming out of its chrysalis because I just finished my finals for my winter quarter!! The last ten weeks have been SO tough and I really didn't expect it to be honest 😅 But I'm happy because my spring term is light and I should be able to be more active finally! 🥰
Oh look, I wrote my first book review in quite awhile! 😅 I talked about this on Twitter this weekend, but I find that I procrastinate writing reviews sometimes because I'm self conscious about my "reviewing voice" 🥺 A few people commented saying they understood what I meant, so I'm glad it's not just me! 😅
I just finished reading #EveryBodyLooking and I really enjoyed it! 🤗 It took me a little longer than I anticipated just because school has really picked up in the last few weeks, but my next read will probablyyy be me finishing the Spin the Dawn duology... Hopefully 😅🤞🏿 Happy Thursday! ♡ #bookblog #bookblogger #booktube #booktuber #bookreviewer #goodreadschallenge #bookish #bookstagram #instareads #igreads #bookblog #ireadya #bookphotography #youngadultbooks
Happy Wednesday! 🤗 It's week 4/10 of my college term and I'm keeping up so far 🤞🏿 But I do need to up my daily reading! In case you missed it, last week I posted a blog post going through my 2020 reading stats from Goodreads! (This photo is a portion of the books for the year 😉) Link in bio! hope your week is going well ❤️ #bookblog #bookblogger #booktube #booktuber #bookreviewer #goodreadschallenge #bookish #bookstagram #instareads #igreads #bookblog #ireadya #bookphotography #youngadultbooks
Follow Cierra's Cynosure on WordPress.com