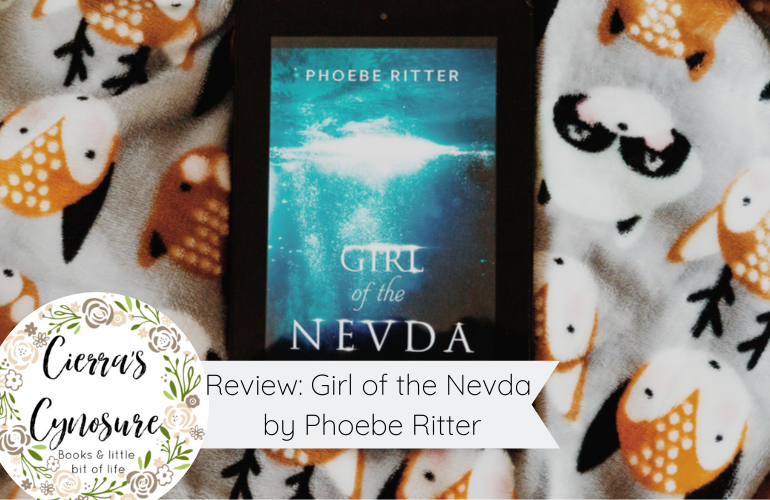 “It feels very much like the calm before the storm.”

Notice: I was contacted by Phoebe and offered a free kindle version of her book in exchange for an honest review. This does not affect my opinions of the work.

Notice: Girl of the Nevda is the middle book of the Daughter of the Zel trilogy. You can read my review for book #1 here.

“There are seven of you. Only six were ever reported missing.”
I raise my hand slowly to get his attention.
“Sir, my family did not report me missing.” I manage not to shrink from his gaze.
“And why is that?”
“I don’t know, Sir.”

With a life in Zel behind her, Efa must turn her face to Nevda.

However, with suspicion hanging over her time with the Zel and confusion over her life before that, a future in the land of her mother’s birth may not without risk.

One of the many things I love about second books in a series is the fact that there’s usually some character growth between the final page of book one and the first page of book two. Efa Valerian has definitely grown between Daughter of the Zel and Girl of the Nevda.

While thinking about how I wanted to structure this review, I found myself narrowing down my discussion to 2 main themes. So let’s begin with the first.

Theme #1: The importance of independence.

By far, the biggest struggle that Efa faces between book one and book two is adapting her new situation. From the end of Daughter of the Zel, we knew that Efa was not certain of what returning to Nevda would look like for her. Now, in Girl of the Nevda, she finds herself living with Sul’s family who happen to be, well, filthy rich.

Efa is taken aback by the extreme hospitality this family offers. While she is grateful for it, she simultaneously feels completely crushed beneath it. As a free spirit who is unafraid to speak her mind, Efa is confused and offended by the expectation of her to become Sul’s future domestic housewife.

[Roland] “The point I am trying to make is, she’s a bright girl. If she wants to learn, let her learn. In the meantime they would be married and when the children come along she would probably give all of it up.”

But Roland’s assertion does not sit well with Efa, who aspires to be a doctor. As she overhears these words, she struggles with the choice she seemingly has to make: get comfortable with this expectation, or assert herself but risk disapproval or losing Sul.

“The more these thoughts play in my head and the more I try to come to terms with the life before me, the more I find I do not want it.”

In the end, she chooses a path divergent from the expectation. Though this is primarily driven by the final turn of events in the book, I really appreciated representation of a female main character who is self-determined despite having it all at her fingertips. There are many conversations to be born from this theme of the book.

The most pronounced way that Efa grows as a character between book one and book two is how she learns to fully embrace her half-Zel identity.

Along with navigating her days under the weight of expectation and guilt, Efa finds herself afraid that she has made a mistake by leaving Zel in her haste of anger. She often thinks of her father and brother and what her life would be like had she stayed on the other side of the border.

“It is different here. Part of me wonders if I left too soon.”

Being in Nevda, the expectation is to adhere to Nevdian socio-political views of the Zel. For Efa, this is a point of extreme confliction. Throughout the book, she is faced with multiple situations where she should have talked badly about the Zel people, but didn’t. In fact, she takes every opportunity to try to change the Nevdian narrative of the Zel.

“They aren’t what Nevda make them out to be. The Zel don’t want a war. They never have.”

This theme of the book is very comparable to certain socio-political issues happening around the world at this very moment. Though I won’t venture into that, there are even more conversations to be had here as well. My personal takeaway from this is that people like Efa, who defy what is socially acceptable because they know the truth, are the reason that change happens.

Lastly for this section, I wanted to highlight two quickies that I really enjoyed about this book despite its major themes!

For one, the relationship between Efa and Sul in this book feels so authentic and pure. Sul is an angel to Efa and I honestly feel very attached to him. He somehow says everything that I would want to hear if I were in Efa’s position.

[Efa] “My family don’t want me,” I gasp between breaths.

For two, Persephina ended up having so much more depth than I initially thought she would. She has so many past secrets and sacrifices she had to make for the safety of her family. For this reason, she kept me puzzled throughout the entire book because I wasn’t sure if I’d end up loving or hating her.

In the end, I felt sorry for her and all the things she went through and the fact that she had to keep it all a secret. Phoebe did a fantastic job with having a character being multi-dimensional and feeling real.

Also: the foreshadowing of this final character reveal for Persephina was excellent.

Finally, there are two critiques that I have for this book. The first is that there are a considerably high number of what I call “crutch phrases” throughout the book. Here are a few I remembered to highlight:

“My breath catches as the music builds and I realise I have been holding it in.”

“I can see Elunea hold her breath while she awaits a response.”

“I nod, blushing under the compliment.”

The reason I choose to point out these phrases is not to be nit-picky, but because I view them as missed opportunities for more rich description of human emotion.

How many times a day do you find yourself actually holding your breath when you’re anxious, if any? A better representation of being anxious could be sweating. Tapping/bouncing feet. Fidgeting. It’s in small actions like these that characters come to life on the page.

The final critique I have is that there is a certain scene of the book that feels like it holds significant value for events that happen in Choice of the Sezel. However, this scene felt very confusing and the meaning of it is still unclear to me. Here is a snippet of what I’m talking about:

Context: Sul and Efa receive a letter from their friend Ard, who says that his father attempted to kill him again while their other friend, Cal, was visiting:

“‘That doesn’t make any sense…why would he wait until Ard had company to try to kill him?’ I think on this for a second. My mind wanders and, reading between the lines of the letter, a piece clicks into place.”

There is no follow-up conversation or commentary about what this “missing piece” actually was. While this may be just a misunderstanding on my part, I believe that under the guise of trying to be suspenseful, the necessary explanation of (or even a clearer allusion to) what is going on was completely lost.

Nevertheless, I hope this question will be answered in Choice of the Sezel, which I will be reading and reviewing here on the blog next month!

Thank you again to Phoebe for providing a kindle version of this book and making the review possible. If you would like to support her, the Amazon link is at the top of the review. As always, thank you for reading. See you next time!

11 thoughts on “Requested Review: Girl of the Nevda by Phoebe Ritter”