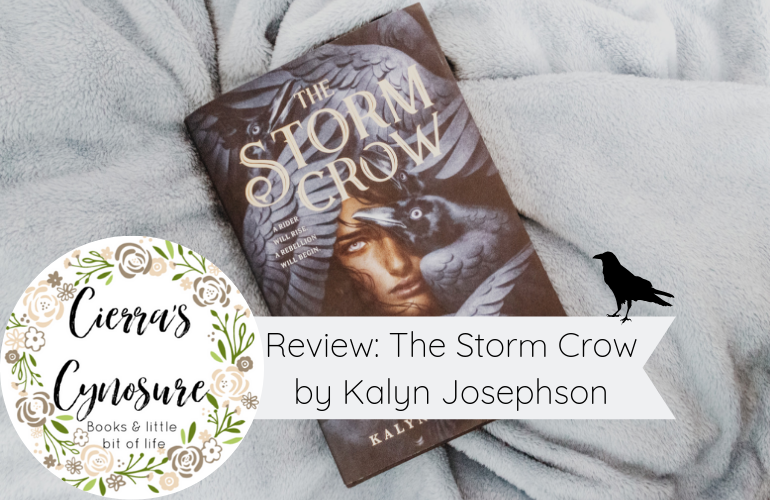 “Either the remaining kingdoms banded together under the empire, or we all crumbled beneath it.”

In the tropical kingdom of Rhodaire, magical, elemental Crows are part of every aspect of life…until the Illucian empire invades, destroying everything.

That terrible night has thrown Princess Anthia into a deep depression. Her sister Caliza is busy running the kingdom after their mother’s death, but all Thia can do is think of all she has lost.

But when Caliza is forced to agree to a marriage between Thia and the crown prince of Illucia, Thia is finally spurred into action. And after stumbling upon a hidden Crow egg in the rubble of a rookery, she and her sister devise a dangerous plan to hatch the egg in secret and get back what was taken from them.

The Storm Crow begins with action. Almost immediately, we the readers are thrust into the middle of an attack on the kingdom of Rhodaire. Within the first two chapters we are given an insight into Rhodaire’s societal norm of elemental crows being responsible for everything—from weather to war.

The world building was fantastic. Not only does this book include a map within the front cover, it also includes a guide to the world and the kingdoms in the back of the book for easy reference. But besides the obvious depictions of the world, Kalyn Josephson meticulously paints the world throughout the book in unique ways.

The primary world-building technique at play is Thia’s interactions with other characters, though we are also clued in from Thia’s internal thoughts, which consist of thorough observances of the world around her. Her thoughts are warranted, do not feel out of place, and really solidify just how dependent Rhodaire was on their crows.

“Managing the huge fields had become too big a task without the crows, who had been responsible for most of Rhodaire’s farming. We had no system for the water, once delivered by water crows, and many of the crops weren’t native to Rhodaire’s humid climate, only surviving thanks to the storm crows.”

Other kingdoms of the book are also well developed. Diligent details regarding the different cultures, climates, fighting styles, and more of each kingdom are woven effortlessly throughout the story. I immensely appreciate this attention to detail, because it makes each place feel unique.

For instance, If Thia were to observe a certain person’s clothing style or demeanor, I as the reader would be able to take an educated guess at which kingdom the person is from.

“The Jin fighting style used an opponent’s weight and movements against them, making them skilled dodgers.”

Oftentimes in books with multiple kingdoms, the kingdom of the main character is the only one that gets developed. Josephson’s effort to lace her book with unique characteristics of each kingdom does not go unnoticed, and helped me as the reader feel that much more immersed in the world of The Storm Crow.

Let’s also talk about character complexity. Each character introduced in TSC is important in some way. Their personalities are unique, quirks are known, and strengths are prominent. Everybody has a background, a hidden motivation, a purpose—just like in real life. There are no characters that feel disposable or exist only to advance the plot.

Thia was also an incredible main character. She is multifaceted, and her emotions flicker and fluctuate just like ours do here in the real world. Most notably, she is grounded in depression after the attack on her kingdom, and her depression does not evaporate as the plot picks up. I was pleased to see depression accurately represented as something more than an ephemeral emotional state.

“Someone else would come. Someone capable. Someone unbroken.”

Finally, I wanted to include some social conversations that The Storm Crow could elicit:

My sole issue with The Storm Crow is the fact that a very important subplot of the book felt astonishingly predictable. As this is a spoiler-free review, I cannot say much more than that. But let’s just say that a queen—especially the queen of Illucia—knows her kingdom and everything that happens inside its walls. Anthia underestimates this in a big way, but to find out how, well—you’ll just have to read the book.

As always, thank you for reading my review! If you’ve read The Storm Crow, what are your thoughts about it? If you wrote a review, drop the link! Until next time.

16 thoughts on “Review: The Storm Crow by Kalyn Josephson”