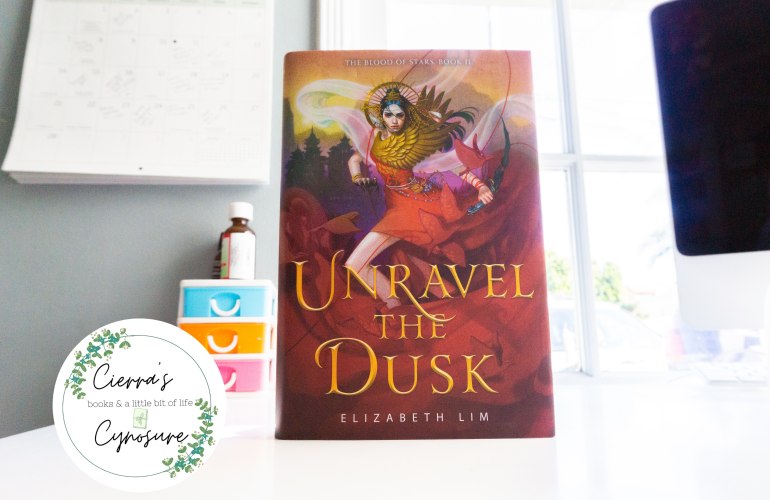 “But hope was a valuable weapon, and we were sharpening its every edge.”

Notice: Unravel the Dusk is the sequel to Spin the Dawn by Elizabeth Lim. Read my review for book one here.

Maia Tamarin’s journey to sew the dresses of the sun, the moon and the stars has taken a grievous toll. She returns to a kingdom on the brink of war. The boy she loves is gone, and she is forced to don the dress of the sun and assume the place of the emperor’s bride-to-be to keep the peace.

But the war raging around Maia is nothing compared to the battle within. Ever since she was touched by the demon Bandur, she has been changing… glancing in the mirror to see her own eyes glowing red, losing control of her magic, her body, her mind. It’s only a matter of time before Maia loses herself completely, but she will stop at nothing to find Edan, protect her family, and bring lasting peace to her country.

Although my reading is off to a very slow start for 2021, I do not regret taking my time to carefully enjoy the finale of this beautiful duology. Spin the Dawn was released in July of 2019, so it’s been almost a year and a half since I read book one. Not going to lie, I was nervous going into Unravel the Dusk because I thought I’d forgotten everything that happened. Luckily, Elizabeth Lim does an excellent job of catching her readers up to speed in the first few chapters, and surely enough, it all came flooding back to me.

This sequel is intense. If you’ve read the first book, you know that Unravel the Dusk is essentially one big race against the clock for multiple boding outcomes: Maia’s fate, as she slowly but surely turns into a demon bound to Bandur and the Forgotten Isles, and the fate of the empire that rests upon the marriage of Lady Sarnai and Emperor Khanujin, finally bringing peace after the 5 years winter war that claimed both of Maia’s brothers. Clearly, a lot is at stake and time is ticking for our weaver of magic.

As I don’t review sequels all that often, I’m not sure what is/isn’t considered a spoiler. All I can say is that this book was both heartwarming and heart wrenching. It had moments of hope and moments of utter despair. It was uplifting and crushing. The duality of emotion that Elizabeth Lim is able to interlace in her plot lines is what makes her writing so captivating. That, combined with the ever stunning description of the world around our main characters makes for such an immersive reading experience.

In all, I’m just very satisfied with how this duology has come to an end. Lim makes sure we as readers are left with no loose ends or lingering questions. If you haven’t gotten a chance to pick up Spin the Dawn or Unravel the Dusk, I’d highly encourage you to do so. If you’re looking for a book inspired by Asian culture and lore, magic, shape-shifting, and a whole lot of adventuring — you won’t be disappointed.