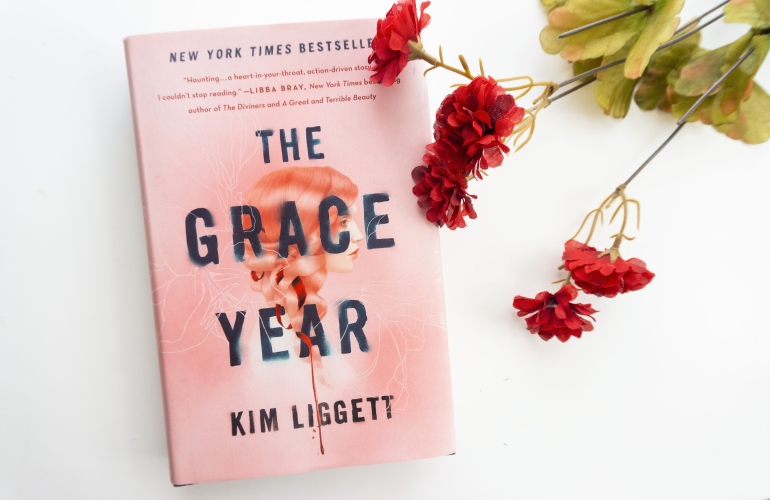 “But isn’t that how every horrible thing begins? Slow. Insipid. A twisting of the screw.”

No one speaks of the grace year. It’s forbidden.

In Garner County, girls are told they have the power to lure grown men from their beds, to drive women mad with jealousy. They believe their very skin emits a powerful aphrodisiac, the potent essence of youth, of a girl on the edge of womanhood. That’s why they’re banished for their sixteenth year, to release their magic into the wild so they can return purified and ready for marriage. But not all of them will make it home alive.

Sixteen-year-old Tierney James dreams of a better life—a society that doesn’t pit friend against friend or woman against woman, but as her own grace year draws near, she quickly realizes that it’s not just the brutal elements they must fear. It’s not even the poachers in the woods, men who are waiting for a chance to grab one of the girls in order to make a fortune on the black market. Their greatest threat may very well be each other.

With sharp prose and gritty realism, The Grace Year examines the complex and sometimes twisted relationships between girls, the women they eventually become, and the difficult decisions they make in-between.

Welcome to a novel that is not afraid to make you horribly uncomfortable and angry with all of its displeasures. I have mixed thoughts about The Grace Year, but let’s begin with the positives.

What I loved most about my time with this book was its dark and ominous mood. Though this title is a young adult fantasy, it has a horror element in how scenes are written and the feelings they convey in readers. We follow our main character Tierney through her grace year, and there is a constant feeling that someone is watching. Watching Tierney, watching the entire cohort of girls. It’s eerie, and I loved it.

I also found a lot of enjoyment in decoding the ways of life of women in Garner County. Living under an incredibly oppressive patriarchy means every look, gesture, and symbol means much more than what meets the eye. It was interesting to witness how at the beginning of the book, Tierney thinks she has the county and its way of life all figured out. But over the course of her grace year, she discovers that the county and the grace year aren’t what they seem.

“Your eyes are wide open, but you see nothing.”

There are two core themes that I picked out of the plot of The Grace Year. The first is simply survival. Though I am a thorough lover of the outdoors and especially forests, I definitely do not think I could survive an entire year in a campsite in the middle of a forested island. For that reason, I loved having Tierney as the main character because she had survival skills. I was genuinely fascinated by details such as clean water can be found upstream at its source, chopping and configuring wood to make rain barrels, building an irrigation tunnel from a mountain spring into the camp, and more. I’ve seen others complain that of course Tierney is the only one who knows gritty survival skills out of the entire cohort of grace year girls. Some have touted this as Tierney being “not like the other girls,” but honestly? I’d argue that it’s pretty realistic. Most 16-year-old girls are not naturally proficient in survivorship skills, especially not 16-year-old girls living under this society that views them as only good for marriage and bearing sons, labor, or outcasts.

The other major theme of this novel is the contrast of expectation vs. reality. As mentioned in the synopsis, when thirty-three girls are isolated on a forested island with poachers waiting to catch them as prey, the expectation would be that the poachers are the girls’ biggest threat. But as the plot unfolds, the reality is that the girls’ minds are even more dangerous at times. It’s interesting, and it adds an element of psychological thriller to the plot as well.

“I know enough from eavesdropping on the fur trappers returning from the wilds to understand that the real enemy out here isn’t the wildlife or even the elements, it’s your own mind.”

From the very beginning, Tierney is positioned as a rebel to the ways of life in Garner County. Her father prepares her for survival in a way that no other father does. She is known for her “unladylike” actions and is nicknamed “Tierney the Terrible” by her peers. She dreams even when it is forbidden for women to dream. And most of all? The one thing Tierney James absolutely does not want to do is be married off and become the property of a husband. She purposely turns down and avoids any male suitors that want to claim her. If she survives her grace year, all she wants to do is be shipped to the fields to do hard labor for the rest of her life.

That is her plan.

Multiple reviewers have wildly praised this book for its feminist attributes, and though yes, they are there, I think any feminist allegory is completely destroyed by how the book ends.

I found myself to be so disappointed with the resolution of this book. I held onto hope that something was going to change after all of the discoveries Tierney makes during her grace year, and I think in some sense, the book leads you to believe that these discoveries are mounting to a bigger climax. But instead, when Tierney returns, she simply assimilates back into county life somehow, even though she now knows much, much more.

I don’t know, maybe I wanted Tierney and the other Grace Year Girls to come back and burn the town down. Anything would’ve been more satisfying than the resolution that we got, honestly.

Another critique I saw a fellow reviewer mention that I wholeheartedly agree with is that Garner County exists in a vacuum in this novel. There is no backstory as to how the county reached the level of patriarchal oppression that it does. No mention of nearby civilization and if Garner County is an outlier in its practices, etc. The unexploited potential in building up the backstory of this little down is very disappointing as it would’ve added another layer of immersion to the plot.

In all, I’d say that the most common pitches for The Grace Year were spot on. It is a novel that successfully combines elements from fictional classics such as Lord of the Flies for its survival and psychological thriller elements, The Handmaid’s Tale for its societal setting, and is comparative to more recent young adult works such as Wilder Girls. Even though I was solidly disappointed by the ending, I was also solidly entertained by solving the central question of what happens during the grace year. If you’re a reader who enjoys analyzing literary themes and are not too bothered by an underwhelming resolution, The Grace Year may be for you.

8 thoughts on “Review: The Grace Year by Kim Liggett”