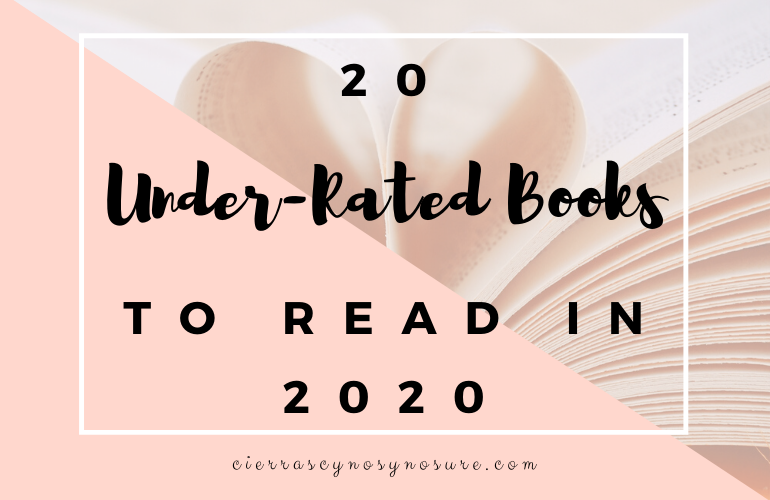 Last week, I was wracking my brain to come up with a comparable and relevant list of books for a booktube video I wanted to do called “If You Liked That Book, Then You’ll Like This Book.” And since that video has not come to fruition, you can probably guess that I ultimately couldn’t come up with enough books.

At first I was a little bummed because I was excited to record such a video (also because I felt bad for not reading enough “relevant” YA books) But then, I decided to re-purpose the books I had come up with.

Since I apparently read books nobody really cares about, I decided to compile a list of 20 of them that I think deserve more attention in the new year. We book bloggers/booktubers love keeping up with and being hyped about new releases, but to quote someone I follow on Twitter, “sometimes YA books published in 2016-2017 just hit different…”

So, that is how this post idea came to be, and without further rambling, here are 20 underrated/forgotten books you should definitely have on your 2020 TBR!

DREAMOLOGY: A girl that only dreams about ridiculously cool things and a cute boy until they actually start coming to life!

YOU KNOW ME WELL: Alternating chapters between two MC acquaintances who hardly know each other until they lock eyes in San Francisco for a pride parade. AKA: *the* cutest LGBT+ book I have ever read.

SUMMER OF SUPERNOVAS: A girl who puts her faith in the stars. A window for a cosmically aligned romance closing. A boy who seems like a perfect match. Or is he? (For my fellow astrology geeks: you don’t want to miss this one).

MEET CUTE: A compilation of short stories about how couples met. We can call it kismet. LGBT+ cuteness.

THE LOVER’S DICTIONARY: A love story told in dictionary entries using words that describe the chapter. Revolutionary. (Attention fellow word nerd: this one’s for you!)

UNSAID: A wife who dies of cancer watches her husband’s grief from the after life. She also watches the secrets she never told while she was alive be revealed. Definite tear jerker.

LOVE LETTERS TO THE DEAD: A girl grieves the loss of her sister by writing letters to historical figures who have passed away.

EVERYDAY: A wakes up in a different body every single day. Never too far from the last, never the same person twice. He tries his best to never leave a trace…until she comes along.

(Admittedly not “underrated” in any sense of the word but I need more people to talk about this book with, so….)

THE MEMORY BOOK: A girl graduating high school has her whole life ahead of her until she’s diagnosed with a fatal disease. The Memory Book is how she will remember everyone and everything she loves.

UNDERWATER: A rainy day; a generous girl. A boy walking to school with a heavy backpack that sounds like metal when it hits the floor of her car. She’s the only one who witnessed what happened…she’s part of the reason why it happened.

HOW IT FEELS TO FLY: A graceful ballerina who takes grace very seriously. So much so, it results in an eating disorder and a convoluted road to recovery.

BLACK MIRROR: A self-loathing sister. A brother found dead at the hands of suicide. Or is there more to the story?

THE GUTSY GIRL: Literally a collection of the wildest stories you’ll ever hear. Plus a lot of cool illustrations!

LAB GIRL: A memoir about Hope Jahren’s life as a woman in science. Shows the highs, the lows, and the honest truth of her struggle with bipolar disorder.

AN ANTHROPOLOGIST ON MARS: A neurologist takes on seven case studies of seven unique people and learns their stories. See: a blind man who is given sight, a man who’s memory is trapped in 1968, a surgeon with Tourette’s syndrome, and much more.

#4-1: Indie Authors You Should Know About

YOUNG, DUMB, AND NAIVE: A coming-of-age story about a girl entering high school and all of the anxiety and peer pressure that comes along with it. Alicia Henderson is a black indie author that does an excellent job of creating an unapologetically black cast and showing the reality of growing up in a poor black family.

THE SHATTERED MOON: Shaya rescues prince Rowan after their kingdom is seized by lizard-like monsters called Krag. A fallen, evil god named Rakmar has returned after being banished, and he’s on the hunt for the prince Shaya happens to have in tow. Alexander Wilkinson is the indie author of the A Divine Legacy series, and does a great job at depicting young kids saving the world.

DAUGHTER OF THE ZEL: A girl with a touch that can kill. Two countries with a war history. Efa knows two things: she must stay away from everyone—especially the Zel people on the other side of the border. But when she is kidnapped and discovers she is actually half-Zel, things get complicated. Phoebe Ritter is an indie author of the Daughter of the Zel series — featuring the epitome of what growth of a character should look like.

TO HEAR THE OCEAN SIGH: A boy meets a girl after she accidentally texts the wrong number. A friendship ensues; a tragedy strikes. Bryant Loney is an author of multiple works ranging from YA psychological thriller to his newest poetry book.

So there you have it! 20 books you should definitely read in 2020. I’m very happy to spotlight each and every one of these titles, and I hope you found something that piqued your interest. Until next time!