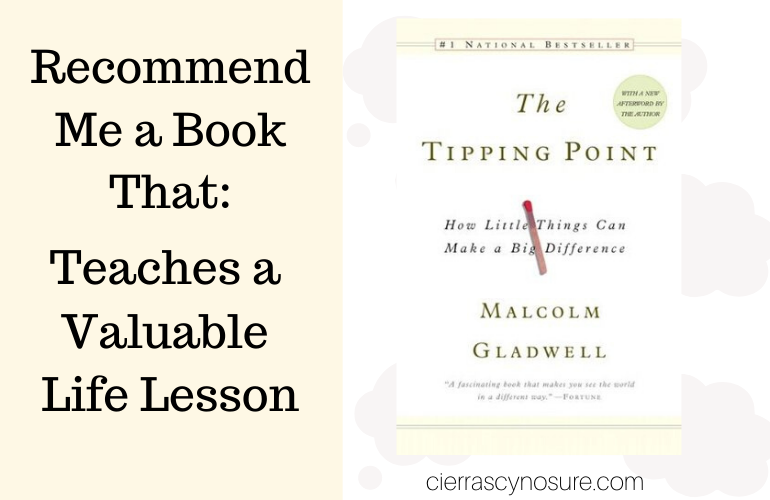 Though I have been slacking incredibly on my nonfiction reading goals for the year, the ones I have managed to complete have really influenced the way I view the world. And by the new design of the #RecommendMeaBook thumbnails, you know we’re talking about The Tipping Point by Malcolm Gladwell.

Recommend Me a Book That: is a series on the blog I started back in May of this year. It’s essentially a mini-book review of a book nominated by me for a certain feature/theme it holds. You can see more of the books I’ve recommended in this series and why here.

So, Malcolm Gladwell has been an autobuy author for me ever since I read Outliers back in my 11th grade AP English Literature class in high school. (AKA: a long time now). It was my first step into the world of nonfiction social psychology books and I’ve been fascinated with this genre ever since.

I listened to The Tipping Point on audio back in July and gave it four stars. I don’t normally review nonfiction books on the blog because they’re not my central focus, but I do like to feature them here in this series!

Why should you read this book?

First of all, the audio book is narrated by Gladwell himself, so you actually get to hear him read his own words, which was very powerful for me. (It was also a great way to pass time in the LA traffic this summer).

But even if you don’t listen to the book and physically read it, the content he covers in The Tipping Point is so thought-provoking. If you’ve ever wondered who starts trends and how they become so massively successful, you’re going to want to read this book.

If you’ve ever wondered who and what keeps market value of your favorite products from skyrocketing, you’re going to want to read this book. (Hint: it’s someone just like you and me).

If you’ve ever wondered about epidemics in general and how they come to be, you should read this book.

With all of that being said, there’s quite a…diverse set of opinions on Goodreads about this book. I personally enjoyed it because it gave me a new way to think about social epidemics. Someone who has a background of sociology and is more informed about the logistics of the book may have bones to pick, but I’m rather indifferent about fact checking a field I am not apart of.

TL;DR: read this book if you have any interest in sociology and social epidemics. And if you can—listen to the audiobook.

One thought on “Recommend Me a Book That: Teaches Valuable Lessons About Life”