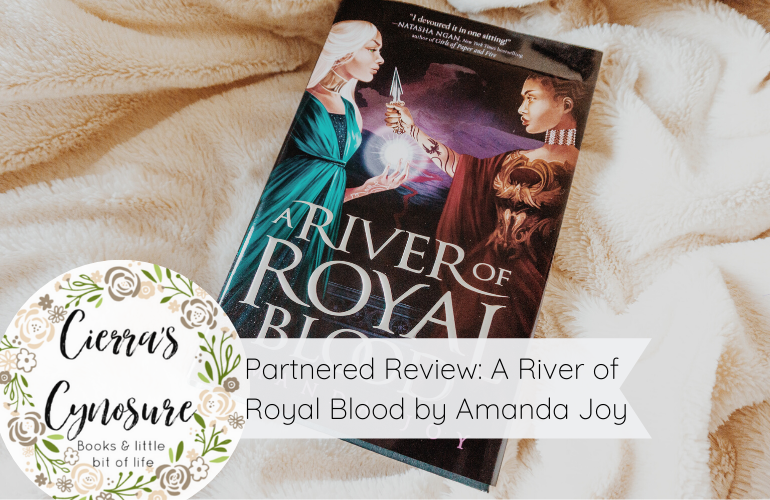 “It takes a great deal of strength to face your fears.”

Notice: this book was sent to me by Penguin Teen as part of the Penguin Teen Partner Program. This does not affect my opinions of the work.

Sixteen-year-old Eva is a princess, born with the magick of marrow and blood—a dark and terrible magick that hasn’t been seen for generations in the vibrant but fractured country of Myre. Its last known practitioner was Queen Raina, who toppled the native khimaer royalty and massacred thousands, including her own sister, eight generations ago, thus beginning the Rival Heir tradition. Living in Raina’s long and dark shadow, Eva must now face her older sister, Isa, in a battle to the death if she hopes to ascend to the Ivory Throne—because in the Queendom of Myre only the strongest, most ruthless rulers survive.

When Eva is attacked by an assassin just weeks before the battle with her sister, she discovers there is more to the attempt on her life than meets the eye—and it isn’t just her sister who wants to see her dead. As tensions escalate, Eva is forced to turn to a fey instructor of mythic proportions and a mysterious and handsome khimaer prince for help in growing her magick into something to fear. Because despite the love she still has for her sister, Eva will have to choose: Isa’s death or her own.

A River of Royal Blood is an enthralling debut set in a lush North African inspired fantasy world that subtly but powerfully challenges our notions of power, history, and identity.

I have praise for this book’s writing, magickal elements, and how beautifully Amanda Joy was able to weave fictional magick with real-life social injustice. Let’s start with the writing.

A River of Royal Blood is another great example of scenic, atmospheric writing at play. The language of this book is captivating and makes frequent use of sensory details that made me feel as though I was truly seeing the Queendom of Myre through Eva’s eyes.

This book also challenged me to think outside of my cultural norms. Firstly, the caste system between humans, fey, and khimaer people has a lot of implications for the way characters interact with each other. But more predominantly, there’s this everlasting sense of looming dread in this book because it is inevitable that one sister has to die. The entire time I was reading this book I was struggling to grasp how Eva could face Isa every day knowing that they’d have to try to kill each other soon.

From the beginning, we know that this book has no true happy ending.

“And when I returned, I would have the magick she’d once begged me to use. I would make her fear it as she should have then.”

But what I admire most about A River of Royal Blood is the fact that it is such a conversation starter.

This book talks about power and what it does to people.

About discovering and coping with the fact that your role models aren’t perfect.

About learning to embrace parts your identity after loathing and suppressing it for nearly your entire life.

About complicated family dynamics, sibling favoritism, and how to navigate being faced with constant doubt from those that should believe in you.

About cultural appropriation and mythologizing real people and cultures that were crushed by historical violent suppression.

This book is about putting a magickal twist on very contemporary issues. I have the highest praise for how Joy was able to navigate the art of weaving fact and fiction into a plot that stares at us like our mirror reflections and demands us to think.

But don’t worry. If all of that sounds intimidating, there are plenty of light-hearted moments sprinkled in as well. Anali and Eva are practically a non-traditional mother and daughter; Bacca has an infuriatingly charming appeal; and there’s just something about Aketo. Eva might just be falling for someone along the way.

With all of that being said, my reading experience with A River of Royal Blood was not flawless. In my opinion, there is one critical thing that really drew away from the book: detail overload.

So, while I do appreciate Joy’s atmospheric writing and it did immerse me into the world she was painting at the beginning of the book, I feel like I was removed and detached from the world by the end of the book.

I wish I could remember who said this, but I recently watched a booktube video where someone said that their pet peeve about YA fantasy is that world building details are often “spoon feed” large lump sums. I definitely think that’s what happened here.

I felt like I was told most of what I needed to know about this world in the first 50-100 pages and then expected to retain that information throughout the entire book. This really took away from my comprehension of the intricacies and implications of the world and its caste system. By the end of the book, a lot of the really important details were lost to me, which made the ending feel like a big question mark.

The vehicles of exposition in A River of Royal Blood are a mix of Bacca and Eva’s lessons, these continuous assassination attempts, and the impending nameday celebration and rival heir battle. There was just a lot to keep track of throughout this book, and at some point, I simply got lost.

Books with such complex world-building and social hierarchy like this one benefit greatly from gradual world building rather than blocks of details given at once. I feel that I would’ve had an easier time digesting the world and its people if they were introduced to me similar to how we learned about Eva’s magick of blood and marrow: incrementally through her lessons with Bacca.

There are a few other things I would like to touch on about A River of Royal Blood, but I will save them for a booktube discussion video coming soon. Until then!

One thought on “Partnered Review: A River of Royal Blood by Amanda Joy”