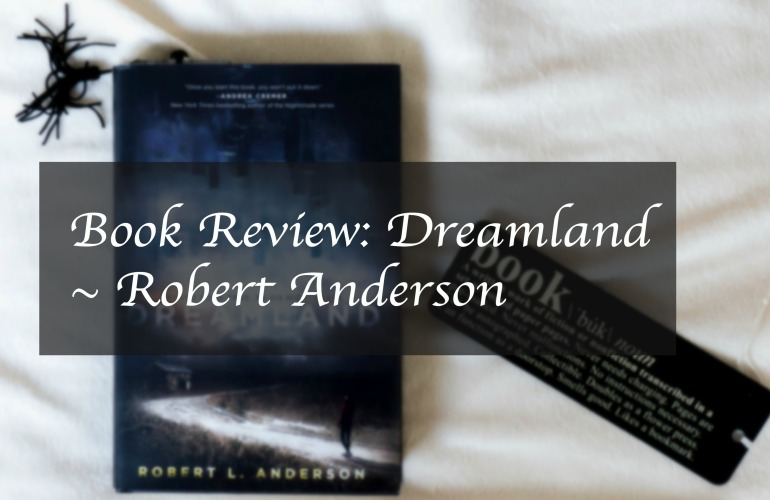 Hello everyone, I’m back! Lately, I’ve been really busy reading and schooling. Unfortunately, in that time I’ve been unable to articulate my opinions on books into coherent reviews, so apologies in advance if this one seems a bit erratic. But lucky for us it fits, because Dreamland is from start to finish exactly that: erratic. Here we go.

Odea Donahue has been able to travel through people’s dreams since she was six years old. Her mother taught her the three rules of walking: Never interfere. Never be seen. Never walk the same person’s dream more than once. Dea has never questioned her mother, not about the rules, not about the clocks or the mirrors, not about moving from place to place to be one step ahead of the unseen monsters that Dea’s mother is certain are right behind them.

Then a mysterious new boy, Connor, comes to town and Dea finally starts to feel normal. As Connor breaks down the walls that she’s had up for so long, he gets closer to learning her secret. For the first time, she wonders if that’s so bad. But when Dea breaks the rules, the boundary between worlds begins to deteriorate. How can she know what’s real and what’s not?

Cover: The cover is pretty much the only thing about this book that I really really enjoyed. It mixed with the synopsis completely sold me. I love the upside-down city at the top of the book, and the eerie road Dea’s walking.

Chapter length: The chapter-length of this book is not the problem. It’s the fact that within these chapters it feels like everything and nothing happened. All at once. Too much happens, which if executed correctly would leave me constantly flipping pages, dying to know what the answer is! But it didn’t. I instead found myself dreading the next chapter because I get sucked in and then at the end left wondering… what?

Pacing: Again, too much at once. I couldn’t process it all and it feels like there were holes that were starting to be filled in…? But then the book took a completely different turn and again left me wondering what in the world was going on.

Characters: Sigh. Possibly the most disappointment comes in here. I wanted to like Dea… but I couldn’t. I sincerely think I liked Gollem more, and she’s absent for a good portion of the book when things hit the fan.

Dea is the kind of person I’d want to be with in the case of an emergency. At some points, she shows her ability to think straight, and I’m like “okay okay, I like the way she thinks!” And then all of a sudden she’s freaking out and then sane. Freaking out, and then sane. See where that can get annoying? I was kinda eye-rolling and asking her to make up her mind about how she felt.

Connor I liked. He’s very frivolous and optimistic, which made me happy because it temporarily put Dea at ease for a change. He seems like a guy I’d totally get along with in real life because he’s not afraid of adventure. I liked him more than I liked his and Dea’s love interest. Honestly, if they would’ve just stayed really close friends throughout the book, I would’ve been more satisfied. Why? Insta-love alert! Pretty much: “I have a really heartbreaking backstory, and once you find out you’ll feel sympathy for me. And that sympathy? Bam! Instantly turns into attraction. Now you love me, and I love you too!”

And I totally get that adversary brings two hearts together. With Dea practically being a nomad and never experiencing normality, and Connor having to deal with the murder of his mom and brother…I get that these hardships brought the two close. But to be honest, they got a little too close a little too fast. Even if the actual love didn’t come until the very end I would’ve been more satisfied. Alas, that’s not what happened.

I think I liked the concept this book had more than anything. Maybe it was just me being blind to the somehow obvious, but I did not sign up for a murder mystery. I thought this book was going to be about Dea, her mom, and her dreams. Which it was, but Connor’s backstory totally took the spotlight! Every so often Dea would remind us that she had to walk because she was getting sick, but the dreams she walked seemed so…mundane. The only ones that were really vivid were Connor’s nightmares about his family being murdered. And even in those, I struggled to paint the picture.

Don’t get me wrong, this book is totally unique. I mean, dream walking seems pretty cool. Minus the I-get-sick-if-I-don’t part. Maybe I just wanted more of that.

Dreamland is an awesome concept that was executed poorly. I was skimming pages because I just could not figure out the setting. I get that the city was supposed to be bustling and chaotic, but the whole thing just felt more overwhelming than enchanting. Again, really love the concept, but the execution in my opinion was really poor.

So to sum it up, world development was really poor, and that, unfortunately, is really important in this book. How can I become enthralled with the concept of dream walking if I can’t even picture the dreams? How can I understand the atmosphere of a dreamland if I can’t comprehend the setting? I think Dreamland is going on my list of, eh, maybe I’ve read it again someday. Just to see if my opinion changes.

Have any of you read this book? If so, this is one I’d really love to know your opinions about!