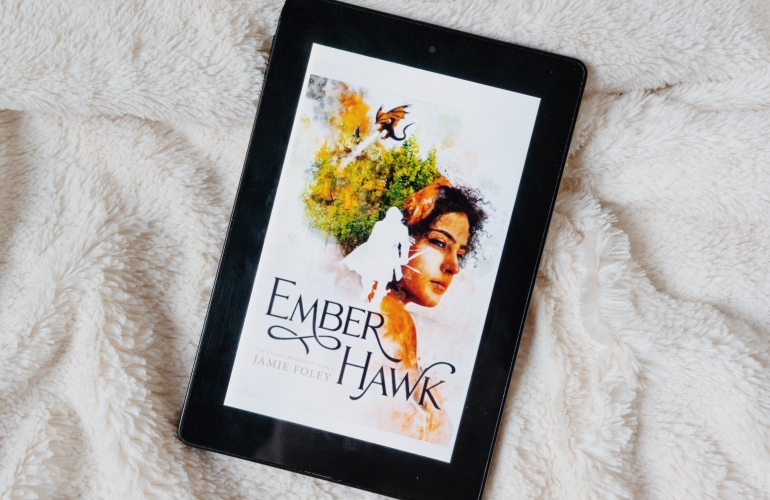 Notice: I received an e-copy of this book from BookSirens in exchange for an honest review

The elementals have decided they’re gods, and humans are nothing but fuel for their fire.

But the forest is infested with tree-scorpions and giant cats that wield elemental invisibility, and they’re hungry, too. When Kira mistakes one elemental creature for another, she ends up with the last thing she wants in her trap: an enemy soldier.

An invisible spy. Ryon can’t afford to be a prisoner of war. If the Malaano Empire extracts his secrets, the rumors of war will be confirmed—and the tribes stand little chance against the Empire unless they can put aside generations of bad blood for the sake of a Tribal Alliance.

When Ryon’s escape leaves Kira injured and her livelihood in flames, Ryon must choose between aiding her… or returning to his chieftess with vital information. But can he survive the trek when an elemental pursues him for his rejected heritage?

A sacrificial princess. Imperial Princess Vylia is given a powerful ancient stone as her wavesinger trials approach. But is the stone’s whispering voice from the water goddess, or a masquerading elemental the creator god imprisoned millennia ago?

When Vylia’s diplomatic mission to the tribal lands erupts in fiery revenge, she, Kira, and Ryon must work together to survive—or become pawns in the battle of the gods.

When I was perusing Book Sirens back in August for a new read, I stumbled upon Emberhawk and was instantly intrigued. This book has every single one of my favorite tropes: adventure! Humans and animal connections! Legends! An antagonist that’s really ambiguous!

So naturally, I requested to give it a read. Unfortunately, I have to say that I enjoyed the elements of the book significantly more than the book as a whole, but let’s talk about the good first.

Emberhawk is the first book in the Katrosi Revolution series. It is a story rich with culture that we readers get to experience as we follow the journey of our three main characters Kiralu, Ryon, and Princess Vylia. This first book focuses heavily on Kira and Ryon’s journey, whereas Princess Vylia’s importance is hinted at but is most likely being reserved for the next book.

I appreciated the challenge of complexity that this book takes on. The plotline and characters are both multifaceted and sometimes contradictory, as are real life and real people. The story begins and ends with a complicated situation that our characters are tasked to solve. It was enough to keep me questioning what came next.

Learning about the cultures of each tribe was an interesting experience and helped slowly piece together the world. In the end, it was still hard for me to truly picture what the world around our main characters looked like, but the intention of world building through character experience was definitely present.

The creatures of this book are truly otherworldly and fascinating. Honestly, I think reading the descriptions of the Trace Cats and D’hakka Tree Scorpions and Elemental Gods was the best part of the book for me. In addition, the magic system that this world has is curious: I’m not sure I’ve experienced blood-bound, elemental magic executed in such a way before. The magic aids with both everyday life and is handy to get our characters out of sticky situations.

(What’s more is that not only do the humans and Gods have this magic, but the creatures did too! A giant Trace Cat that can bend light and become invisible while hunting? Scary stuff).

Overall, I appreciated the elements of Emberhawk. If you’re on the hunt for a book with diverse tribal cultures, snarky but sweet main characters, a brewing war, and elemental magic and gods, you might want to check it out.

Unfortunately, with all of that being said, Emberhawk also fell short for me in many ways.

To begin, I found it extremely hard to keep track of the many Gods, Goddesses, and Elementals of this story, which is a critical piece of the puzzle as the legend of these deities is one of the largest driving forces of the story. We learned bits and pieces about each deity through character interactions, but the problem is that everyone had something new and different to say. Trying to keep track of what God is responsible for what element and according to who was unfortunately just plain confusing.

Because I struggled to understand such a critical driving force of the book, I felt largely disconnected from the entire why of the story. A war is brewing between the Gods? Okay, but why?

Similar to how I felt disconnected from the plot of the book, I also felt disconnected from most of the characters of the book. I struggled to mentally envision them, let alone care for what happens to them. The most I know about Kiralu after completing the entire book is that she has dark olive skin and unruly curly hair. The most I know about Ryon is that he has bright orange eyes and white hair. I couldn’t tell you a thing about Princess Vylia’s appearance.

In all, the major elements that are supposed to immerse you in the world as a reader fell short for me. I couldn’t properly envision the world around our characters nor the characters themselves. I felt disconnected from the point of the major war that is commencing, and I felt confused by the tales of the higher powers that were supposedly causing the war.

…But at least the book had cool magic and creatures, right?

I personally will not be continuing the Katrosi Rebellion series, but if you give this book a try and like it enough to follow the story, chat to me about it below! Until next time.