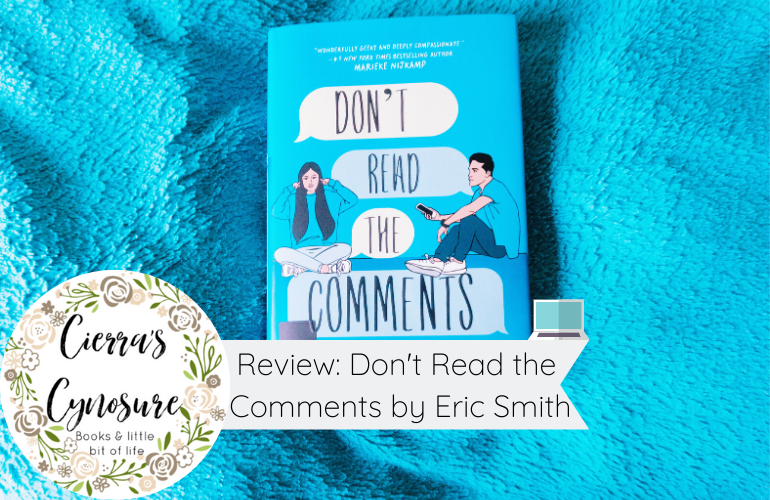 Notice: I requested and was approved to receive an eARC of Don’t Read the Comments from Netgalley. Today is its release day, so happy book birthday to Eric Smith!

Divya Sharma is a queen. Or she is when she’s playing Reclaim the Sun, the year’s hottest online game. Divya—better known as popular streaming gamer D1V—regularly leads her #AngstArmada on quests through the game’s vast and gorgeous virtual universe. But for Divya, this is more than just a game. Out in the real world, she’s trading her rising-star status for sponsorships to help her struggling single mom pay the rent.

Gaming is basically Aaron Jericho’s entire life. Much to his mother’s frustration, Aaron has zero interest in becoming a doctor like her, and spends his free time writing games for a local developer. At least he can escape into Reclaim the Sun—and with a trillion worlds to explore, disappearing should be easy. But to his surprise, he somehow ends up on the same remote planet as celebrity gamer D1V.

At home, Divya and Aaron grapple with their problems alone, but in the game, they have each other to face infinite new worlds…and the growing legion of trolls populating them. Soon the virtual harassment seeps into reality when a group called the Vox Populi begin launching real-world doxxing campaigns, threatening Aaron’s dreams and Divya’s actual life. The online trolls think they can drive her out of the game, but everything and everyone Divya cares about is on the line…

And she isn’t going down without a fight.

I have to start this review by saying that even though I read this book for free through Netgalley, I loved it so much that I actually bought the physical book afterwards. It was that good.

Don’t Read the Comments has become the paragon of what I wish all stories about internet privacy to be. It tells the story of an ordinary girl who gains a following streaming her favorite game online, and what happens when anonymous and increasingly violent harassment disrupts her life. It also tells the story of how a favorite game brings two people together. What’s better? It allows for these two stories to happen simultaneously. The blossoming friendship and the escalating harassment are not mutually exclusive events.

When it comes to online friendships/relationships, there tends to be a dominant narrative in some form of “trust no one” for x, y, and z reasons. And while that narrative is definitely true—and presents itself in the story in the form of Divya and her best friend Rebekkah’s very real life harassment and assault—the book also brings counter narratives to account for. Some being the fact that 1. there will always good people amongst the bad ones online (cue entrance: Aaron), and that 2. real life benefits can come from having an online presence (see: Divya helping her mom pay the rent for their apartment via the revenue from sponsorships on her stream). And there, we have the recipe for how harassment and friendship from the same source coexists in Divya’s life.

The near-equal weight given to both the pending friendship with Aaron and the increasingly-scary harassment from trolls created a confliction that Divya struggles with throughout the book. Does she let the trolls win, lose her friendship with Aaron, but stop the harassment? Or does she risk her safety and fight back?

“The unfairness of it all weighs on me. It’s hard to encourage a blossoming friendship with an internet stranger when there are anonymous misogynistic trolls lurking around my house.”

Other things I must praise Don’t Read the Comments for is A) the world-building of both real life and the game world Reclaim the Sun, and B) the genuineness in character interactions.

A) the details given about the world that Divya lives in both realistically and virtually made following her story in both dimensions an incredibly immersive experience. For instance, here is a quote of Divya day-dreaming about Aaron visiting her:

“I wish this walk was alongside some actual water. Maybe here, in Jersey City, wandering downtown. We could rummage for records, like he said, or drink coffee in Word, my favorite bookstore. I could catch him during golden hour, framed perfectly for a photo in the setting of the sun, in a dog park surrounded by Corgis and Yorkies and Boston terriers, the signature small pups of the town.”

This quote does so much in such a little way. It A) definitely gives the location (Jersey City, NJ), but it also B) brings the location to life by including descriptions of a downtown waterfront, a favorite bookstore, and even the types of dogs you see in NJ. I know nothing about NJ, but now I want to go there.

Similarly, this amount of detail is given for the world of Reclaim the Sun:

“Reclaim the Sun spontaneously generates planets and galaxies, but it also creates the environments on the planets. The ecosystem, the wildlife, the weather.”

“I hear the other ships buzzing in my ears, their gear and landing procedures all the same as mine. The ships in Reclaim the Sun are varied in terms of colors, shapes, and upgrades, but everyone has the same kind of weapons, same navigational gear, all of that.”

I have remorse that this game doesn’t actually exist after reading this book because I was so immersed in its functionality. I could see myself playing this game.

Lastly, I absolutely have to pay homage to the beautifully realistic dialogue between characters. By the end of this book, I could tell that Eric Smith knows the art of using colloquial language to bring characters to life. Case and point:

D1V: Uh. Brings us closer. Or something. OKAY I FEEL AWKWARD NOW BYYYYYE.”

This informal chatting between Divya and Aaron throughout the book not only kept the online friendship element alive, but it also diffused moments of tension and brought their characters closer.

There are many other things I could talk at length about in Don’t Read the Comments. It’s a book that has 100% made it to my favorites shelf, and I will undoubtably be re-reading this book multiple times in my life. Please, do yourself a favor and read this book.

And if you need just one more thing to convince you, I will leave you with this: Divya’s best friend Rebekkah is a bookworm that has a bookstagram and names her ships in Reclaim the Sun after her favorite book titles.

Now read the book. And while you’re at it, Don’t Read the Comments.