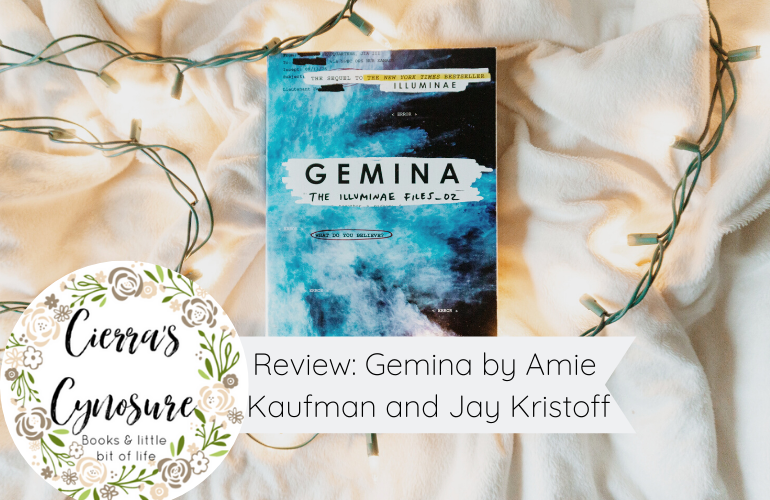 “And now, born from the ashes, she’s a warrior in bloodied black.”

Notice: Gemina is the second book of the Illuminae Files trilogy. You can read my review for book #1 here.

Moving to a space station at the edge of the galaxy was always going to be the death of Hanna’s social life. Nobody said it might actually get her killed.

The sci-fi saga that began with the breakout bestseller Illuminae continues on board the Jump Station Heimdall, where two new characters will confront the next wave of the BeiTech assault.

Hanna is the station captain’s pampered daughter; Nik the reluctant member of a notorious crime family. But while the pair are struggling with the realities of life aboard the galaxy’s most boring space station, little do they know that Kady Grant and the Hypatia are headed right toward Heimdall, carrying news of the Kerenza invasion.

When an elite BeiTech strike team invades the station, Hanna and Nik are thrown together to defend their home. But alien predators are picking off the station residents one by one, and a malfunction in the station’s wormhole means the space-time continuum might be ripped in two before dinner. Soon Hanna and Nik aren’t just fighting for their own survival; the fate of everyone on the Hypatia—and possibly the known universe—is in their hands.

But relax. They’ve totally got this. They hope.

I could essentially copy and paste my review for Illuminae into this review with the exception of switching Kady and Ezra for Hanna and Nikolas. My praise remains the same: this series is truly otherworldly.

As I did with Illuminae, I jumped into Gemina relatively blind as to what the next set of obstacles would be for our intergalactic protagonists. In fact, I hadn’t even known that book two follows different characters until someone commented on my review for book one.

The same dynamic we had in book one is upheld in book two: an inconspicuously fierce female main character paired with an unlikely male character counterpart. When faced with seemingly insurmountable odds, the duo must unite to save themselves and their world.

As I said with Kady and Ezra, Hanna and Nikolas are believable main characters whose drives and motives feel real. By the end of the book both characters are dramatically altered by the plot and experience significant character growth. For instance, Hanna begins as a shallow, spoiled daughter of the commander whose sole mission was to woo Jackson — a very handsome security guard of Heimdall.

But by the end of Gemina, she’s “a warrior in bloodied black.”

Nik begins as another shallow character whose sole purpose is to irritate Hanna with his romantic passes while participating in his uncle’s illegal drug trade on Heimdall.

But by the end of Gemina, Nik is not afraid to take a shot.

Besides the awesome main characters, the world-building and plot of Gemina were breath-taking once more. This is where the multimedia format of the Illuminae Files is so helpful, because there are actual diagrams of what Heimdall’s layout is.

For example, when character X is trapped in some room of the station, you can actually reference the drawings within the text to visualize where they are and how the stakes are raised because of their compromising position.

There’s also this really enthralling gallery of the actual BeiTech strike team that invades Heimdall! You can physically see the people who are taking over—their names, their code names, what squad they’re on, etc. It made the “hide and seek” plot of the book that much more anxiety-inducing, which I’ve come to love and expect from these books.

Overall, it’s just really hard to articulate just how much I appreciate the unconventional, messy, and beautifully engaging formatting of the Illuminae Files. It helps me as the reader form my mental images of the world and characters, while simultaneously assisting in my understanding of a complex plot. When I read these books, I feel completely and utterly immersed in the otherworldly setting.

Seriously, if you haven’t read Illuminae yet, what are you doing?

“Now, children, watch closely. Hold your breath. Listen. And I will show you the components of calamity.”

The second reason being that the presence of the alien predators known as “lickers” aboard Heimdall didn’t feel as urgent and compromising as the infected did in Illuminae. The infected swarmed the Alexander by the end of Illuminae, whereas the presence of lickers only picked off a few people throughout Gemina. Disappointingly, their presence in the end was more of a hindrance rather than a complete roadblock. I wished for more urgency and dire consequences with the lickers.

Though I was not as completely consumed with emotions as I was by the end of Illuminae, I still thoroughly enjoyed Gemina and I cannot wait to finish this series with Obsidio this month. As always, thank you for reading!

6 thoughts on “Review: Gemina by Amie Kaufman and Jay Kristoff”