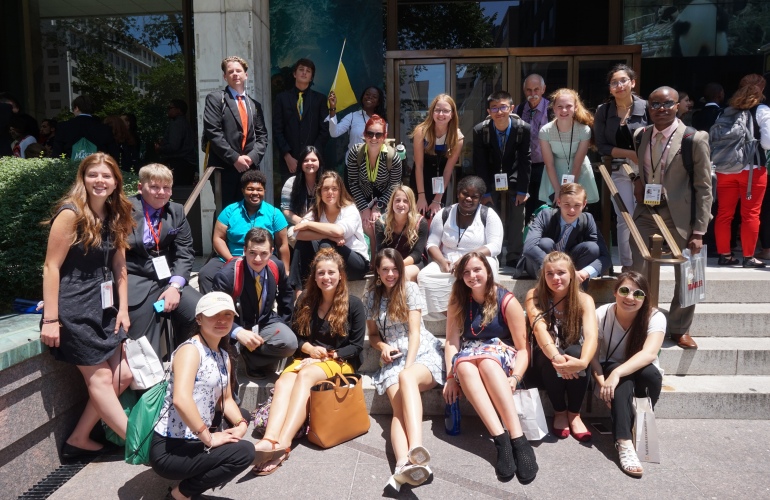 Ello everyone! The first thing I want to say is today has probably been one of the most inspirational days of my life. Meeting all these (not sorry) BAD ASS WOMEN has seriously made my fire SO much brighter for the future. Like wow…why are only 2 of you from SoCal I need to stay friends with you.

The highlight of my day actually happened at the beginning of my day, but since there’s just so much to unpack from the speakers, I’ll save the deep, feelsy reflection until the end. 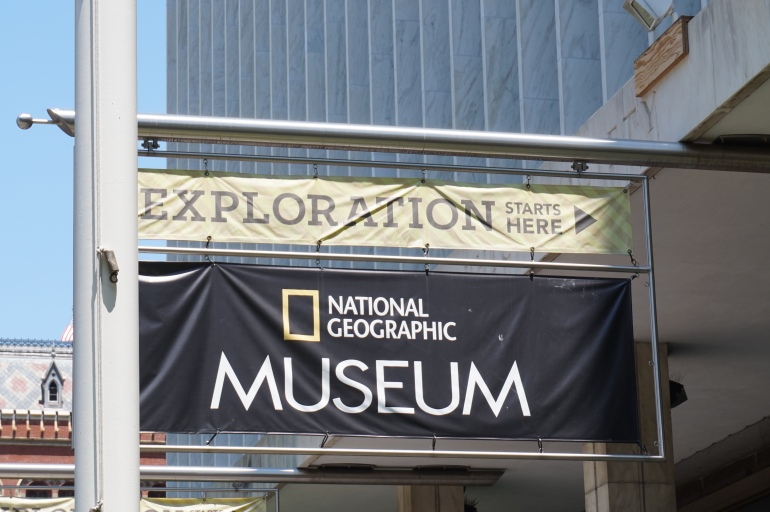 When we first arrived to the museum, we discovered that it was split into two sides: one being the Earth Explorers, and the other being a whole exhibit on sharks. I’m not exactly sure why sharks in particular…but whatever I guess. (slideshow)

The museum itself to me was actually kind of underwhelming…to my surprise and disappointment. There was a lot to look at, but I guess I just associated something as huge as Nat Geo with a just as huge museum. We had 45 minutes for both sides and it honestly didn’t take 45 minutes to look at the exhibits on either side. The gift shop was amazing on the other hand and I wish I had more suitcase room. I would’ve spent a loooot more than I did if the suitcase capacity was possible…. I also didn’t take many pictures because of this reason. 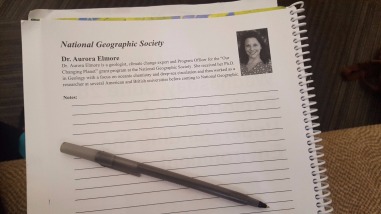 Dr. Aurora’s speech was not what I was expecting based on the summary of the material she planned to cover, but it was still an informative and inspiring speech. She divulged with us her research as an Oceanic chemist and why we look to our seas to date the world and actually know the temperature of the water in that time period! She also explained our (Earth’s) orientation and shape in relevance to the sun effects our climate naturally, and compared it to the obviously unnatural climate change we are experiencing in the contemporary.

“I think people get stuck in their narrow focus…”

“That’s not the way it works for everyone.” (Context: a delegate asked how she ended up working for NatGeo, and she explained that there is no one true path to a career, especially in the world of science.)

“Climate change is not a belief…why would we lie?”

She also ended her presentation with an inspirational list of what we can/should do as future researchers, such as checking reliable sources online and reading different point of views and asking questions…etc.

Amy’s speech was all about the world of admissions…since she is an admissions dean here at GMU. Although a lot of Amy’s points I’ve heard countless times as a rising senior, she really drove home the importance of reaching out to admission offices of colleges you’re interested in and getting them to remember your name. She said to us something along the lines of: “We don’t want a list of all your clubs and volunteer activities. If you’re doing that stuff just for the application, you’re doing it for the wrong reason. She also advised to stick to 1-2 major passions yo have, and write deeply about how those passions are effecting your life and how much time you spend realizing those passions. She told us to think about how this would translate into how we’d preform on campus, and I think it was an interesting perspective that I hadn’t previously heard before.

Okay, the inspiration starts here. I’ll give you a summary of what Mustafa brought to the table tonight….because it was a lot. In the best way possible. Mustafa brought a young, connected voice to the summit that I think was a first and pleasant surprise for many of my fellow delegates. Not only was his talk very interactive, it was also very empowering as well. He never read from his slides nor stand on the stage for most of the speech! He was on the floor with us walking around from table to table, and really just familiarizing himself with all of us. He divulged with us his daily words of encouragement, which were:“I’m blessed and highly favored.” Behind him on his slides (which he chose to leave up merely for us to synthesize an idea of his career,) read: “One person can make a difference, and EVERYONE should try.” He not only recognized and congratulated us on our dedication to attending WYSE, he also instilled in us that we are the next generation that’s bringing the fire. He reminded us that even though the little things like turning off a light switch that shouldn’t necessarily be on, really does matter. Kate, AKA team yellow’s spirit animal, expressed a sort of frustration by being held back or feeling as if she wan’t making enough of an impact when she proposed the question of what can we REALLY do to help? His suggestions were blogging (heyyyyy!), v-logging, or simply sharing your voice in your local community!

Another thing I took from his talk was the fact that education is truly a prerequisite to getting involved with initiating change. We all want to jump right in and say YES, LET’S CHANGE THE WORLD! But when it all boils down, do we really know how we’re going to do that? Answer? Heck no we don’t! We can have ideas, sure, but we’re all in the baby steps position at this time. We really have to be familiar with the problem before we eradicate it, because how is it possible otherwise?

A few quotes… “Challenges are not impediments to change.” and “You have the opportunity to be apart of change.” 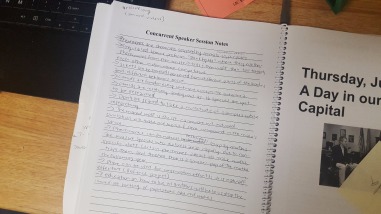 As you can see by my notes page, I learned a lot from Dr. Kester’s presentation. She is a recent graduate and and literally received her p.H.D. 2 weeks before WYSE began. Her talk was centered around her work with the Maned Wolf, who are a generally ambiguous species in the canid family (carnivores.) She talked about specifically their pheromones. What’s interesting is that this particular species are called “induced ovulators”, meaning there has to be some type of stimulation for the female to ovulate and eventually mate with a male. She said that it was an evolutionary advantage since their territories in the wild generally only have a small amount of food and therefore caused them to evolve into solitary animals. She showed us a variety of situations in which the female was presented a male and still did not ovulate, and it let to her question of well, what specific compound in the male’s urine is it that triggers ovulation in a female? Long story short, there’s still no clear answer. But that’s the exciting part! There’s no clear answer but there’s infinite possibility. She even went as far to demonstrate how pheromones can be natural pesticides! The Gypsy Moth is devastating invasive species that can and will rapidly deforest an area with a lot of vegetation. They eat anything pretty much. She told us that scientists discovered that a specific pheromone attracts only the male Gypsy Moths, so they used this pheromone in a trap, caught the males, and therefore the population decreased the next year because there were less males to mate with! So so cool. I read about half of Silent Spring before I arrived here and so this was ground breaking for me.

One more thing she talked about was the Red Wolf’s history. Long story short, they weren’t supposed to be around; and it made a lot of private land owners unhappy that they were. She told us that human beings need to be more open to learning to live with large predators, instead of being afraid that they’re automatically set out to hurt us. This could obviously be described as easier said than done, but it was something to think about.

And now, let’s talk about life…

Another point Mustafa Ali tried to make clear to us tonight was the fact that the people truly do have the power. However, it wasn’t just Mustafa who made me realize this fact, it was rather a groundbreaking conversation I had with my fellow delegates Kate, Morgan, Christian, Bob, and even our faculty advisor, Jesi. We covered so many contemporary social issues… women being afraid to be assertive because it makes them look too demanding….how some people feel the need to fit into certain categories of society in order to be called “diverse”… how we should normalize certain traumas to help people cope and talk about their experiences…etc. This conversation all started with us ranting about our insecurity and uncertainty of the college app process we’ll all be going through next year. Jesi told us about her penchant to set a certain pathway of life for herself, and she explained that when things just didn’t work out along that path, she felt lost and defeated by her own crushing expectations of what her life would be like.This is a huge thing for me. I do that ALL the time. I put so much pressure on myself to have a goddamn plan, when reality is, I’m SIXTEEN. I don’t know what the hell I’ll be doing in 10 years, and that’s freaking fine!! I don’t HAVE to know! Jesi taught me that it’s okay to fail and it’s GOOD to fail. Everyone needs to fail sometimes to appreciate the accomplishments and opportunities that present themselves after failure. I might sound overly dramatic or excited, but maybe I am. I freak myself out almost daily over what I want to do with my life someday. Truth is, I someday might not even be an environmental scientist like I have planned now, and that’s okay. Life is unpredictable, and that’s not something you can change, so why stress out over it?

We also talked about being loud. I’m a loud person. I love to laugh and talk loudly and scream when appropriate. We talked about we’re told so much to “calm down” and “be quiet”, that we begin to tell ourselves that when our passion takes over. Even when our inner child takes over. SCREW THAT — BE LOUD! Being loud isn’t bad; being quiet isn’t bad either! The only bad thing is not being yourself to please others. I will never, ever be able to thank Jesi or my other delegates enough for teaching me this lesson. It’s so important to me that I’m actually tearing up as I write this…yay.

One last thing I’d like to share is the fact that I learned that change truly starts with education and audacity. Like I said earlier, you can’t change something you don’t know about, and you can’t change something without the willpower to do it. Be the first person. Be bold. Do what you can to change the world, because I don’t know about you, but I care. I will be the change.